Fixed dentures that have the closest morphology and usage characteristics to natural teeth seem particularly young age treatment for the patients who have completed their growth and development according to the age scale. Fixed dentures, crowns and bridges are preferred in every condition where natural tooth support is available. In cases where there is no support teeth or they are not sufficient, the routine use of implant supports gradually reduces removable dentures applications although they are considered as an important alternative. However, implants may not always be a solution because of some anatomical and systemic limitations. Furthermore, placement of implants does not remove the use of conventional fixed and removable dentures on implant supports. Therefore, the indications and contraindications of fixed dentures should be inspected carefully. 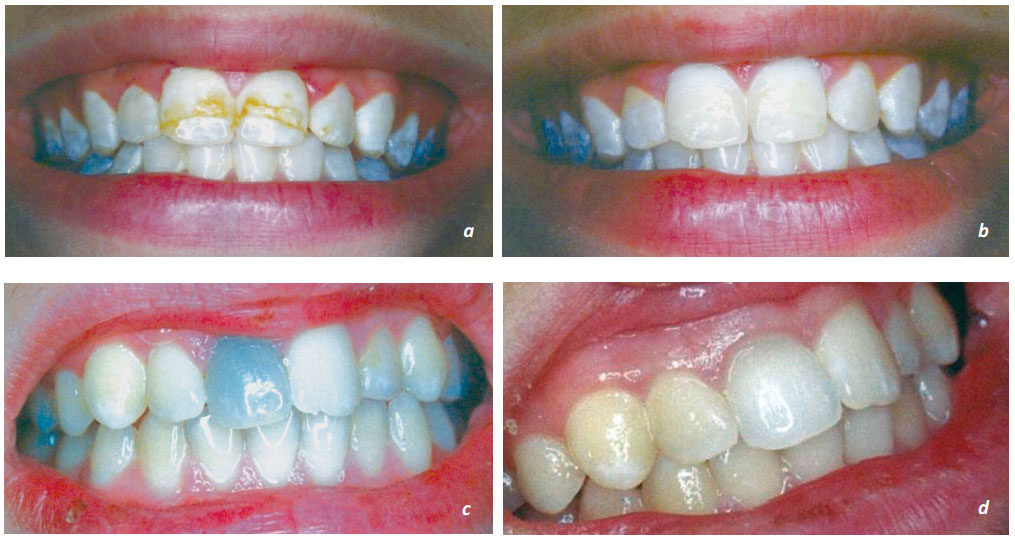 Figure 1. 8. Conservative treatment should be prioritized for color, shape and position disorders of teeth. Discoloration of a, b, vital and c, d, devital teeth can be removed by tooth whitening methods. Such treatments should be performed before crown restorations.

Figure 1. 9. a, b. Shape and position disorders of teeth can be fixed, removing little or no tissue,  with restorative resins. 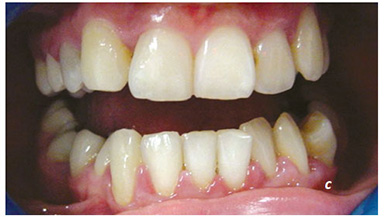 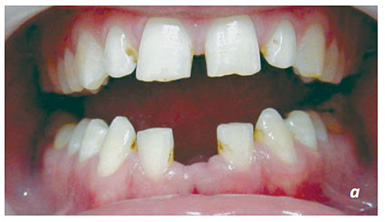 Figure 1. 11. a. Tooth loss may increase from one tooth to a large number of teeth. Improper occlusal relationships can be also fixed with restorations. In some cases, the width of toothless area may not be appropriate with the number of the missing teeth. b, c. There may be also position and shape disorders beside the missing teeth. There may be also openings between the teeth due to periodontal reasons although there is no missing tooth. 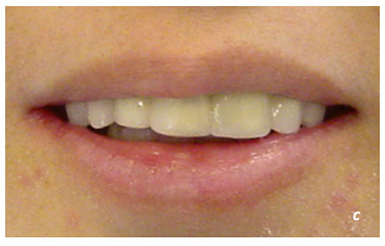 Figure 1.12 a, b, c. In addition to the tooth loss, the teeth that are around the gap and not in their normal position and the decays on the adjacent teeth are the reasons that make the treatment difficult. It has been tried to be corrected the relationship between the nose and midline with some applications performed in preparation and restoration. 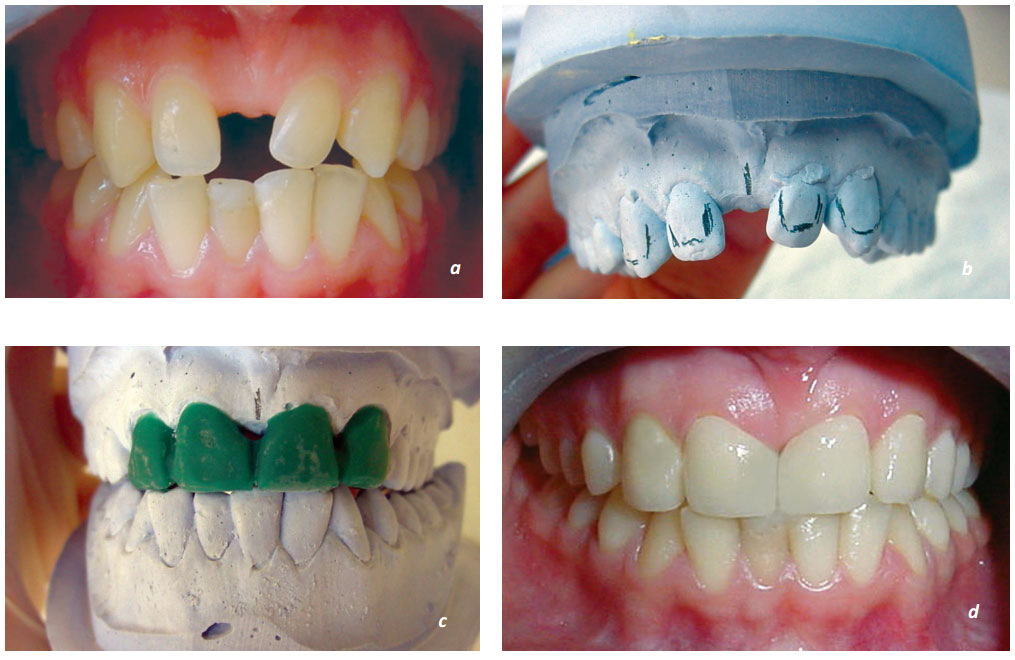 Figure 1. 13. a, The missing of central teeth and the mesial orientation of the maxillary left lateral tooth caused a treatment including canine teeth besides the lateral teeth, and forms these like a lateral tooth. b, c, d, Final restoration had been evaluated with planning and candle mockup on the obtained diagnostic model. 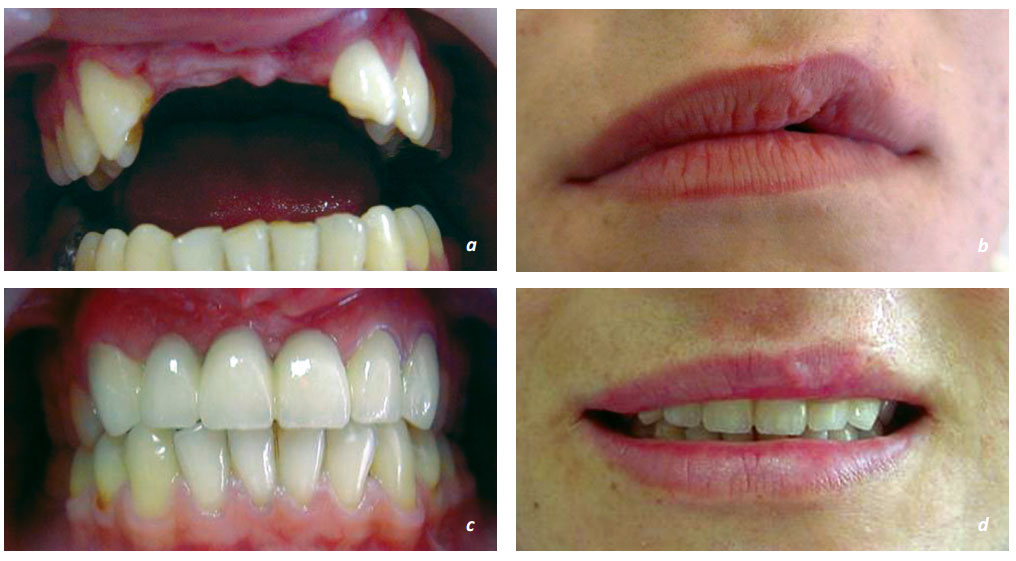 Figure 1. 14. a, b. For the patient who has lost the anterior teeth due to trauma and formed an inappropriate appearance on the lip due to the scar tissue formed, an acceptable appearance had been obtained after the scar tissue was surgically treated and dental bridge was placed. 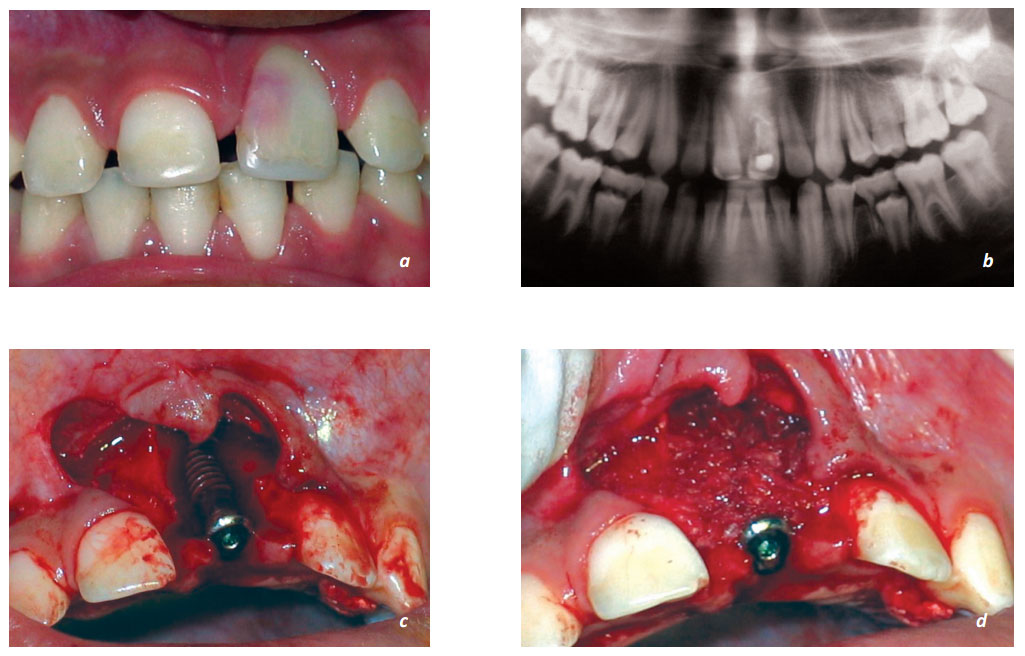 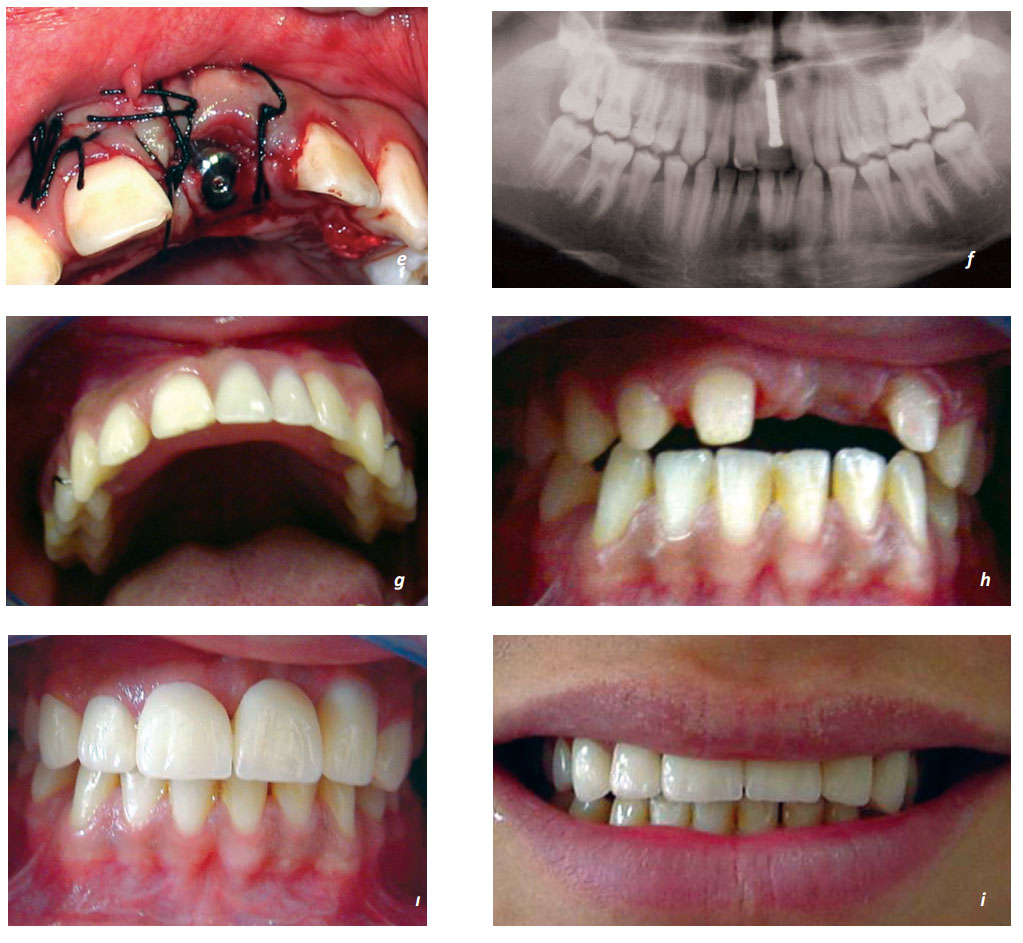 Figure 1. 15 In the case showing the need for the evaluation of implant applications and traditional fixed denture treatments together during the treatment planning, a. Extraction of devital maxillary left central tooth (losing peripheral tissues) of the patient who has not completed his permanent dentition yet and implant applications in same session were planned. Although implant applications require the completion of growth and development period, one missing tooth and functional, phonetic, aesthetic and psychological requirements of the patient during adolescence supported the implant placement. b. panoramic radiography c. placement of the implant by curetting the pathological surrounding tissues of the tooth extracted, d. supporting the surrounding with autogenous graft, e. flap closure, suturing, f. image of the implant and graft on panoramic radiography, g. temporary removable denture prepared for the recovery period was placed into the mouth, the implant applied was removed due to lack of osseointegration, so the temporary removable denture prepared for the recovery period had been used under the control until the patient's growth and development period was completed. h. At the end of this period, ı. a complete ceramic bridge supported by right central, right lateral and left lateral teeth was prepared. i. The relationship between the bridge and lips is seen.

Indications for fixed dentures can be divided into two groups as general and local;

Psychological: Many patients cannot adopt removable dentures decause they don't feel as if they are their own organ. On the other hand, fixed dentures are more easily accepted prosthesis types as part of the natural dentition.

Systemic Diseases: Fixed denture applications may be required for the patients with systemic diseases such as epilepsy because of cases such as coming out of the mouth, breaking or swallowing of the denture, which are contraindication for the removal dentures, during epileptic attack. Furthermore, it should be taken into consideration that there may be also trauma risk related with the fixed dentures in cases of long-term toothlessness.

Speaking: In the case of one or more tooth loss, the fixed dentures will eliminate the disadvantages of the size of the removable partial dentures affecting speaking ability, since they will take up close to the natural teeth. Dental morphologies created in fixed partial dentures should be closest to natural tooth at body part and identical at placeholders on support teeth.

Stability is much higher in bridges firmly connected to the support teeth than that of removable partial dentures. In turn, this ensures that fixed dentures are more functional than removable dentures. There are two main reasons for this:

2. The occlusion forces are transmitted to the periodontium through the support teeth and the neuromuscular system through the alveolar bone and jaws. This provides the maximum function since it is the same as the transmission of force in natural teeth.

Patients who cannot be adapted: Fixed denture applications may be contraindicated for two reasons, psychologically or medically:

Fixed denture applications may not be appropriate for very young and very elderly patients who cannot tolerate detailed preparation and sensitive measurement procedures of prosthetic applications psychologically. Patients with medical disorders such as spastic or cerebral thrombosis may not tolerate fixed prosthetic preparations also.

Age of Patient: Fixed bridge dentures may be contraindicated for very young and very elderly patients. In very young patients, short clinical crown length, large pulp chambers, high decay rates and open to trauma can be considered as the reason for this. Also, the fixed partial dentures applied for patients in growing period are not suitable as they will have negative effects on bone development. Growth and development is completed in girls in 18, in boys in the age of 20 years. However, there are also studies stating that the growth and development continues until 20 years of age in girls and 22 years in boys. This period can be taken as a guide for fixed denture and implant applications since these ages are related with the eruption of the 20-year-old teeth.

Because of short preparation time, removable dentures can be preferred for old patients because they may not tolerate the processes of the fixed partial dentures.

High Decay Incidence: Since fixed dentures provide additional environment for decays in the mouths in which decay incidence is high, endodontic and conservative treatments must be performed very well before the applications and dentures should be prepared very carefully.

Gingival and periodontal causes: Because some disorders such as gingival hyperplasia, marginal gingivitis, and advanced periodontal diseases will turn into worse conditions when fixed dentures, which are more likely to cause periodontal and gingival sensitivity, are applied, prosthetic procedures should be performed after such disorders are treated and prevented from relapse.

Prognosis of teeth to be used as support: If it is thought that the teeth used for support will not be useful in the future, the most accurate procedure is not to make bridge dentures on these teeth.

Length of toothless area: Taking into consideration the length of the toothless gaps and the condition of the teeth that will be used as support, bridge denture applications can be omitted according to the rule of Ante.

Possible tooth losses in the same arch: Fixed denture applications can be postponed to prevent long and expensive procedures from being repeated if the teeth that are in the same arch and need to be included in the fixed partial denture aplications are lost in the future.

Implants can be applied by advanced surgical techniques even if there is not enough tissue, so while it primarily reduce the usage of removable partial dentures, it causes also the change of the fixed partial dentures planning in some cases. Therefore, implant applications should be taken into consideration while the indications and contraindications are evaluated.

We strive to give our patients the smiles they deserve 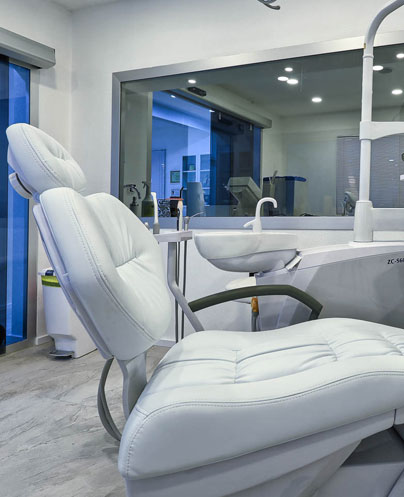